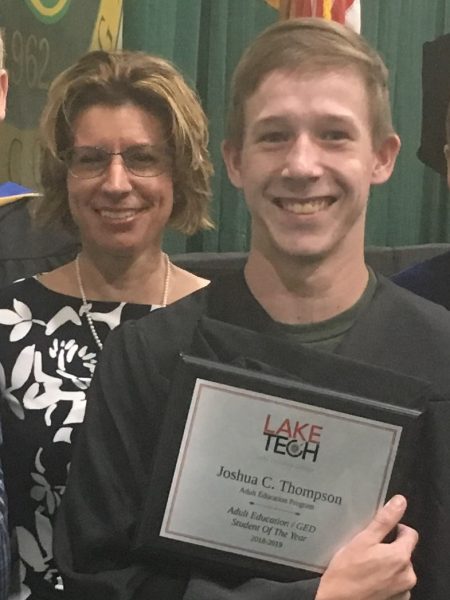 Joshua Collins Thompson came to Lake Technical College on April 22, 2016 as a 16-year-old kid- freckles, braces, ‘kinda goofy,’ unsure of himself and no thoughts of a career. He left in November, 2018 as a mature and responsible, young man, fully- equipped with his high school diploma and certificate in both Heating, Ventilation and Air Conditioning 1 and 2. It took 2 years and 4 months, but he accomplished his goals and this young kid became a man. His initial TABE scores were low, and he struggled with the math concepts as well as reading comprehension. It took repeated review, practice, strategizing and retesting.  Josh loved school, though. He was excited to come to class each day, and he interacted happily with all his classmates and engaged readily in group discussions and activities. He was an inspiration to the class and instructors by his consistent display of elation and zeal for life and learning. On June 17, 2018, Josh was enrolled in Air Conditioning, Refrigeration, and Heating (HVAC) as an Integrated Education and Training (Pathway Plus Program or P3) student. Still needing to raise TABE scores in both math and reading, he took on the challenge of a GEDi and embraced the undertaking of GED preparation integrated with his HVAC curriculum. The HVAC curriculum would come first, and in August 2018, Josh graduated from the HVAC 1 program. Having taken GED Ready’s in all subject areas, just science was above passing. He would graduate HVAC 1 and need to return in the fall for HVAC 2 wherein the RLA, math, and social studies test still lay before him. Josh brought sunshine to the classroom with his infectious smile and became known to the staff as, “Smiley.” You would think this young kid, with his big grin lived happy ever after story life. Not so much-Josh has been raised by his paternal grandmother ever since his mom passed away and his dad was incarcerated.  Born with the congenital disease, Cystic Fibrosis, Josh deals with health and medical challenges every day. Abdominal pain and constant trips to the doctor and hospital, change of medication, surgeries and diet are all part of his normal routine. Yet, he is always smiling.  His smile continues to show his inner perseverance – a smile that wins the hearts of all who meet him.  Josh encourages each of us by the witness of his life and determination. The road to his high school diploma and trade certification did not come easy nor quickly.  Josh had to endure many attempts at TABE and GED testing. Frequent bouts of discomfort, pain, and days in the Emergency Room put kinks in his plan and rescheduling became part of the routine.  Communication with GED accommodations line was another obstacle, and here, I think Josh made the greatest gains to adulthood.  In the many, many, did I say many, phone calls and on hold hours, Smiley learned to stay smiling and deal with matters as adults need to do. When Smiley left in November 2018, the braces and curly hair were all gone.  He had grown a foot in height, but also stood taller for he had reached the goals he set for himself. New goals now lay ahead of him; one other goal has been achieved. He now works in the commercial HVAC field putting into practice what he learned and learning new things.  While his disease works against him, Josh continues on. The smile is still broad, and his personality is still infectious. He has touched everyone at Lake Tech in a profound way — one that will stay with us long after he has gone out and made the world a better place. For we know he will make the world out there a better place for we have seen his impact first-hand here on our campus. It has been an honor and privilege to be a part of his journey and know we are all better people for walking with him. A quote that Josh lives by is “Someone always has it harder than you. Keep that in mind as you keep moving onward. Live for today. You can’t change the past or be certain of the future.”