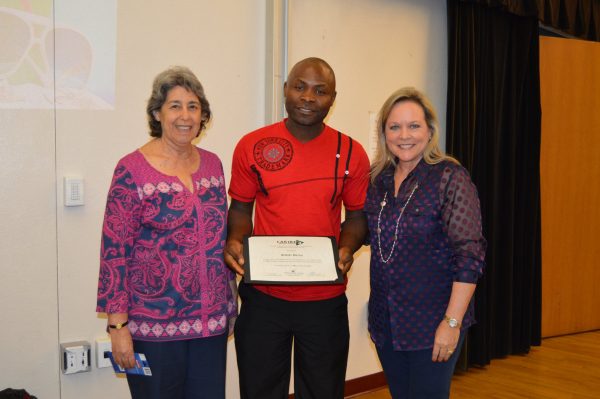 Sadiki Bertin came to the US as a refugee from Congo in September 2016. He immediately signed up for ESOL classes to learn English. His first ESOL teacher was Ms. Shanecia Harvey and she recounted that on his very first day he brought his desktop computer while riding the bus to school to get a free copy of Microsoft Office. It was there that they found out about his big plans for both the Congolese refugees still left in the camps and his fellow Congolese refugees in Tampa. He raised money to support activities for young children still in the refugee camps. He started a non-profit organization to help the Congolese refugees in Tampa. For someone that just came to the U.S., he was more focused on the needs of other people. Because of his leadership and support, the Congolese refugees look up to him as a leader and role model. He knew that it was not easy to resettle in the U.S. so he did what he could to help his fellow Congolese refugees. He helped them get to school by picking them up and dropping them off every school day. He also served as a volunteer for CARIBE to help teach English to struggling elderly refugees. He fought to establish as special Saturday school at the University Area Community Center that fit the working hours of Congolese refugees. The school later served as a central hub for support and outreach for the Congolese community in Tampa. He has helped many refugees find a better place to live or find a better job. He holds meetings with them every week after school to plan events and make sure that their needs are met. His dedication to his people is admirable. His advice for other students is “if you want to learn, no one can stop you.”